A selection of our products and examples of their applications which are not commonly known is introduced by industry here.

MLI (Multi Layer Insulation) is used as an insulation material in an ultra-low temperature environment in aerospace development. This MLI has a multi-layer structure which is made by sewing several films together using a sewing machine.  Machine sewing of the MLI requires a high level of proficiency in terms of the control and feeding speed. Moreover, in fastening the film layers, it is necessary to maintain a constant air layer to maintain the heat insulation performance. Therefore, machine sewing cannot be really said to be an ideal method as it affects the thickness in the sewing areas.

To sufficiently exploit the heat insulation performance of the MLI, our Bano'k pins made of PEEK resin have attracted attention as a component to fasten MLI while allowing anyone to easily maintain a constant looseness and slack.  MLI can be fastened and secured simply by punching the PEEK pins into the MLI using a compact hand tool. PEEK resin can maintain its properties more stably over a wider range of temperatures (from low to high temperatures) than normal engineering plastics, and it has excellent chemical resistance and radiation resistance as well. 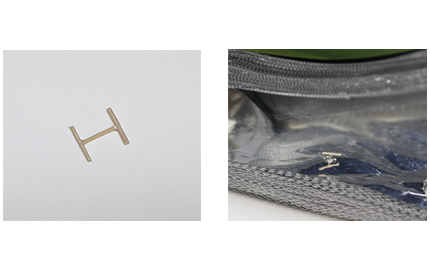 A PEEK Pin is able to maintain a constant air layer to fasten and secure the ML I (Multi Layer Insulation) of the heat insulating material more effectively than sewing but each individual film has its own "looseness or slack". When these film layers come into direct contact with one another, the air layer is lost, resulting in a loss of insulation performance. Therefore, the key point in obtaining a higher insulation performance lies in adopting a structure that can maintain a constant air layer reliably between the film layers.

Although it is extremely difficult to produce such a complex shape even for typical resins, we have realized injection molding using a PEEK resin by making full use of our proprietary technologies and ideas. 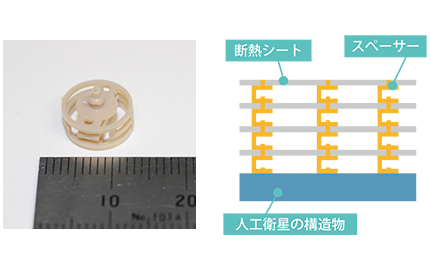 *Picture is for illustration purposes only